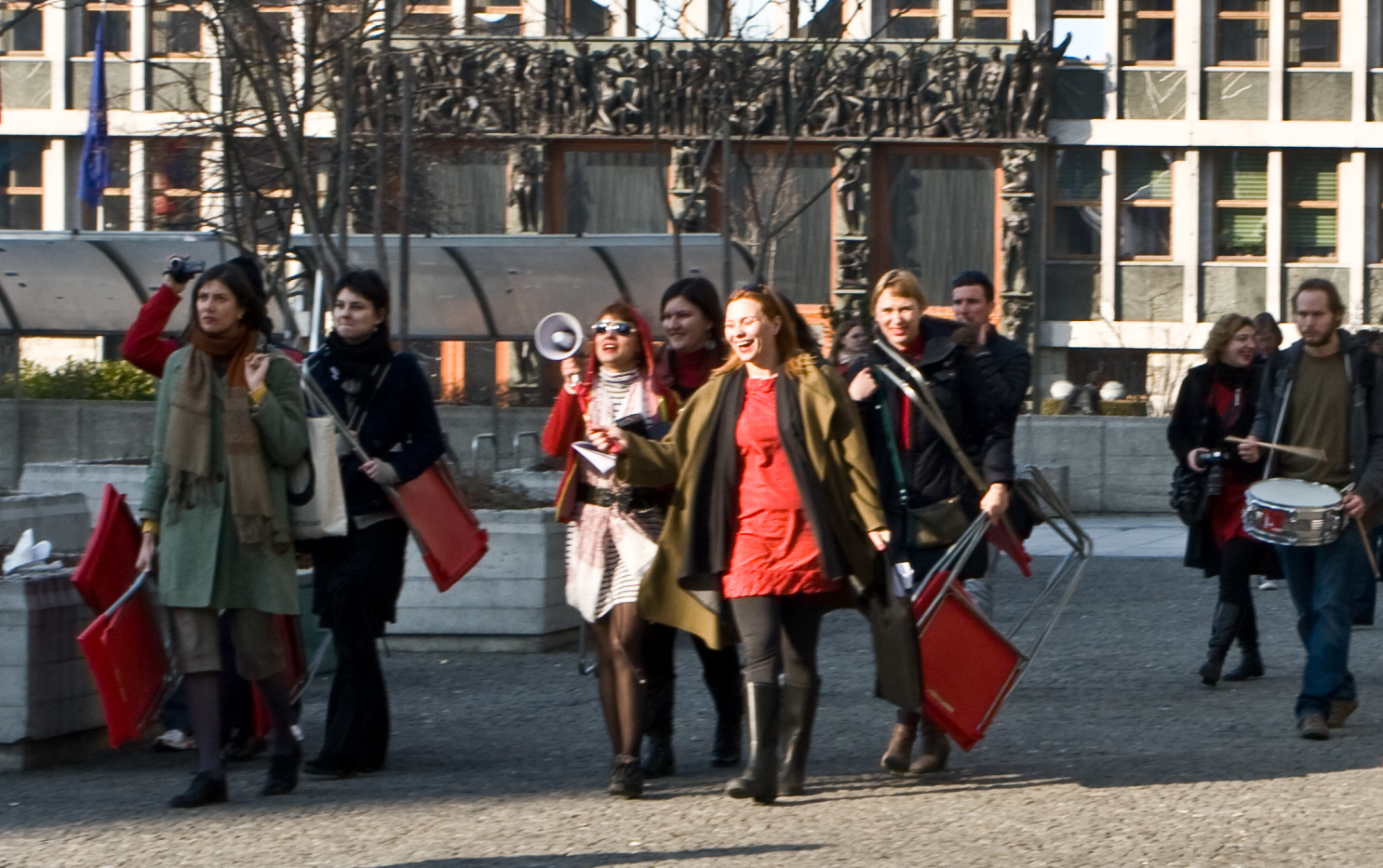 This is Red Mined cosmic emanation online. It is a webpage representing our mind occupation and work creations:

Symposium uncovering our latest ideology, which simultaneously embodies collective approach and individual practices, and Living Archive showing what is and was happening with the Living Archive now and in the past.
Do amuse yourself by watching our youtube channel, or by listening sonic thoughts on soundcloud. For future events and more catch us up on the Facebook yard.

Danijela Dugandžić is a feminist worker, curator, cultural producer and creator based in Sarajevo, Bosnia and Herzegovina. She is active in the women’s movement and in the field of feminist art for the past 20 years. She is currently an acting directress of the organization called CRVENA and a member of a feminist curatorial collective Red Mined. Through the work of CRVENA, she promotes and contributes to development of an independent art and cultural scene, as well as emancipates the position of women in art and culture. As a member of the V-Day movement against violence against women and girls she produced Vagina Monologues plays in Sarajevo, Belgrade and Zagreb and participated in the V-Day events in New York 2001 and New Orleans in 2008. Together with a team of four researchers, architects and activists she developed a comprehensive research and activist program Gradologija (Cityology) that deals with questions of urban governance, use and misuse of public space in the city, urban mobilization and the possibilities for creation, maintenance and development of what is known as “urban commons”. She is currently curating the Actopolis Sarajevo project, a transnational laboratory dealing with urban issues and experimenting with strategies for action. For her, feminism is a lifestyle and at any project she departs from feminist values and solidarity.

Katja Kobolt (PhD) is a curator, producer and educator based in Munich, Germany. Katja has initiated and (co)curated as well (co)produced numerous art projects and exhibitions in different parts of Europe and has been active in a feminist curatorial collective Red Mined. Selected projects: Living Archive editions and 54. October Salon with Red Mined, Belgrade;  A Space Called Public, curated by Elmgreen & Dragset, Munich; City of Women, Ljubljana; GUESTures by Margareta Kern, Munich and Ljubljana; Cross Border Experience, Ljubljana. Katja holds a phd from the LMU University Munich and is active also as a lecturer (Humboldt University of Berlin, educational programme with Red Mined and international conferences) and editor (e.g. Performative Gestures Political Moves; No One Belongs Here More Than You. The Living Archive: Curating Feminist Knowledge; GUESTures). Her articles on art, feminism and life have been published widely. Katja is just starting up an exciting art educational programme no stop non stop on post-migration society for youngsters and schools.

Dunja Kukovec is a curator, publicist and preacher based in Ljubljana, Slovenia. She has curated, co-curated and organized numerous cultural events and exhibitions, mostly in Slovenia, but also abroad. Selected projects: international exhibitions Get Together (2006) and Area Kolaborativa (2004) at Skuc Gallery Ljubljana, Coded Cultures (2004) at Freiraum Museumsquartier, Vienna, Share! Like a receipt! (2004) at Gallery P74 Ljubljana. She co-established and co-curated Haip, biannual festival of open source art at Cyberpipe (2003), Ljubljana, international exhibitions at 12th and 13th Computer Art Festival, Maribor (2005, 2006), and Pixxelpoint festival of digital arts in Nova Gorica (2004). She worked as interim curator at Manifesta 3 and assistance curator of Igor Zabel (1958-2005) at the Venice Biennial (2003); in 2002-2003 she worked as an intern curator in the Museum of Modern Art Ljubljana, where she programmed Scanline/Onedotzero.lj – digital moving image festival and Foo Bar – sound art platform; in 2004 till 2005 she worked at Cankarjev dom Cultural and Congress Centre Ljubljana as a project manager of International Film Festival and Documentary Film Festival. Together with Katja Kobolt she was a co-director of City Of Women – International Festival of Contemporary Arts (2006, 2007). From 2008 till 2011 she ran the Association Igor Zabel Award for Culture and Theory. She also worked with Sarajevo Contemporary Art Center, and was 2 times in the jury for Zvono Award. Currently she is a member of CRVENA Association Sarajevo, a directress of MINA Institute Ljubljana and cofounder of yugotranslate.si. As a society nagger, art distopist and non academic creative thinker she finally settled down as the member of the feminist curatorial group Red Min(e)d. Follow her on Dark Matter Bright Thoughts.

Jelena Petrović is a feminist scholar, cultural theorist and art-worker, nomad traveling between Belgrade, Ljubljana and Vienna. (Co)author of many articles, event and cross-disciplinary projects related to post/Yugoslav issues—particularly to mis/interpretative models of (post)Yugoslav history, memory, culture, art-theory and feminism, working on new epistemological models of knowledge production. Co-founder and member of a feminist curatorial group Red Mined dealing with the relation of contemporary art and feminism in the post-Yugoslav space. Jelena Petrović is teaching about feminist curating and contemporary art practices at the Academy of Fine Arts and Design, University of Ljubljana (since 2014). From this academic year, she is appointed as an endowed professor for Central and South Eastern European Art Histories at the Academy of Fine Arts Vienna.